Another way of saying the same thing is to say that if you want to create superior value for the customer (as perceived through her eyes) you have to focus on both the “Outcome” and the “Experience”.  By “Outcome” I simply mean that when a customer interacts with you then she does so because she desires a specific outcome – an end result.  By “Experience” I mean the customers subjective experience of her interaction/s with you in the process of getting to her outcome.

Companies that excel at the customer delight game deliver both the outcome and the experience.  One company that excels at delivering this delight is the AA.  The AA is one of the larger better known breakdown service companies in the UK.  And it looks like my recent breakdown experience (will share that later with you) is the norm rather than an exception – at least according to the following article: “AA takes top two slots in Which? car breakdown assistance survey”

What is a structure of a perfect service experience?

Allow me to share my recent AA breakdown experience as it is a useful guide on what kinds of behaviour work for us as human beings.

Last weekend my car failed to start: I tried once, I tried twice, I tried three time and then I simply used the other car.  The next day I did the same and gave up – the car simply would not start and I could not figure out why as it had been working perfectly.  It is Sunday, I know I need the car for Monday and it just does not start.  So I have a problem.  My desired outcome: the engine starts and I can use that car to drive around.  The job to be done: an engineer to come out, take a look and fix it so that it works and I have my desired outcome.  The time had come to call the AA – as I have taken out the home breakdown cover. 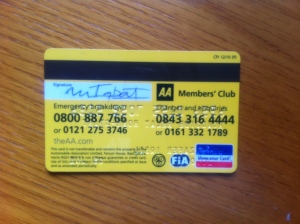 With the AA I had no such problem.  I simply took out my membership card turned it over and rang the emergency breakdown number.  How much effort did I need to make? In answering this question what matters is my experience (my perception) and in my experience it occurred as no effort at all.

We have all heard “we are experiencing unusually high call volumes” no matter when we call accompanied by “your call is important to us”.  Does that make you feel better?  Do you believe a word of it?  Well I am delighted to say that I did not receive any of that rubbish when I rang the emergency number.  My call was answered in less than a minute and I remember being surprised at how quickly a friendly human voice was on the other end of the phone.

Once I was talking with the customer services agent (the young lady on the line) I simply had to give my membership number (which is written on my membership card) and tell her of my situation.  She then simply asked me for the car registration number which I provided.  Using that information she identified the make, model and age of the car.  This was all done in a couple of minutes – at most.  Then she read out the time and told me that someone would be with me within an hour.  The way that she said that occurred as deliberate and confident and that inspired confidence / trust in me: this organisation knows what it is doing and someone will be with me within the hour.  I responded by saying that as my broken down car was sitting on my drive my need was not urgent and so if the AA had to choose between getting to me and someone broken down on the motorway then I’d be happy for them to take care of the person on the motorway.  To my surprise, the young lady on the other line acknowledged my generosity and thanked me for it.  That made me feel good!

After my call with the AA lady I settled down to do some work on the computer.  Before I knew it (because I was immersed in what I was doing) the AA mechanic turned up.  I remember being surprised because the response seemed quick: I looked at my watch and it had only been some 35 minutes – the AA patrol man had turned up in half the time that I had been quoted.

I handed over my keys to the patrolman (“Andy”) and he got busy trying to start the car.  Then he asked me the following question “Did you start the car and then stop the car without really driving it?” I told Andy that indeed I had done that simply to rearrange the car on the drive – to free up parking space for guests.  Andy told me that by doing that I had most likely flooded the engine with excess fuel and soaked the spark plugs.  After a few attempts Andy got the engine started and told me to let the car run for about 20 minutes.  And he advised me how to avoid flooding the engine and thus stop my current problem from happening again.

At this point I felt foolish and bad about calling out the AA.  My issue was a non-issue: I could have done what Andy had done to get the car started.  And I felt foolish that I did not know how easy it is flood the engine in a car like mine.  If I had simply carried out a few sensible behaviours I would not have the issue in the first place.  So I apologised to Andy for having to call him out for such a simple non-issue.  To my surprise he replied that I should not feel bad as it is a common problem.  And he finished by saying “We are here to help you!” and the way that he said it (and the way he had interacted with me in fixing the car) occurred as authentic.  He was not following a script or mouthing some corporate slogan – he believed what he was saying.  I thanked him and he left.

In the second part of this post (Part II) I will cover the 11 lessons for crafting the perfect service experience.

Experienced management consultant working at the intersection of strategy, customer, and technology. Combine a tendency to think strategically with a penchant for getting my hands dirty at the coalface of implementation. View all posts by Maz Iqbal